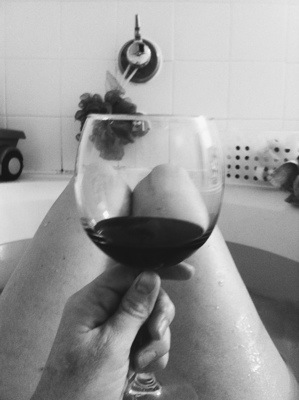 The other night he kissed my mouth with soft and pliant strokes, a special occasion. He ran his hands over my body and slid down between my legs and gently chewed on my black lace panties.

I moaned and squirmed. He held my knees together as he quickly pulled my underwear off, then pinned my knees apart.

He dove back down and carefully avoided sucking on me, but tenderly gripped my clit with his lips instead. I leapt and squealed. It was way too much. “Oh, sweetie,” he crooned, “I’m so sorry!! No lips even??”

“No,” I answered, “nothing but lapping.”

I’m ultra sensitive — how I’ve longed to be like other women who can be sucked and nibbled upon with gusto, but not me! Treat me like a scoop of ice cream, please.

He tucked back into me and pressed his warm, flat tongue against me again and again. He sneaked a couple of fingers into me until I begged him to slip inside of me. His real appendage, not his skinny little digits.

He rose up and pushed into me and buried his scruffy face in my neck. I clung to him and thought about how much I loved him with each slow, exquisite thrust.

It hurt, he was enormous. Bigger than usual.

He took care to go slowly and he kept a close eye on my temperament. When I began to lose coherency he swung my legs over his shoulders and watched me quietly cry.

And like a dog sent to attack he buried himself to the hilt inside of me at a breakneck tempo.

My pussy gushed, her gurgles embarrassingly loud to my ears, and orgasms bloomed and burst and fizzed through me.

He slowed and reached for my wand and lay next to me. I burst into tears as the emotion of being split open by him for the 10,000th time so obviousky loved, but still in secret, made me raw and vulnerable.

He nudged my hand holding the Hitachi and I choked on a sob. “I don’t think I can handle this,” I said.

He convinced me to try.

Two more orgasms later we firmed up plans for La Maison du Voisin (House of The Neighbor). He kissed me sweetly goodnight and I went to bring Peyton into bed with me.

Today, still warm and fuzzy from our last encounter, we made more plans. “Check-in” is at 3, apparently, and I will be massaged, possibly pedicured. I will be fucked, loved on, and cooked for. At 7, we head to Jason’s house for a housewarming party (check the Lovers tab for who he is). Then back to La Maison du Voisin for what, I don’t know.

This morning, I did a 5k with Peyton and I’m currently soaking in a bath washing off the filth. The Neighbor, so thoughtful and kind, brought me a glass of wine to start off our night. I’m also watching Top Chef Masters. I’m fairly certain I’m in an alternate universe.

Because in my world, I don’t have a man, a boyfriend, who takes care of me.

I don’t have anyone who thinks about what I like or goes out of his way to make me feel special. It’s true I have someone who’ll fuck me sideways till Tuesday and who’ll wipe my tears as we drive to a funeral, but a random, romantic night just because I deserve it?? Noooo, I so don’t have that.

Except, I guess I do, because I have him.

I have daddy issues.
London crows and London kisses.
Settling in for the night.
Dogs know when you’re covered in pussy.

32 thoughts on “I get a little pampered.”